IKT, the International Association of Curators of Contemporary Art, held its annual congress in Luxembourg, Metz, and Dudelange from 28 April - 1 May 2011.

It was a special Congress, as it was Enrico Lunghi's final one as President of the IKT. Enrico is highly regarded, his managerial competence keeping IKT as an organisation on an even keel, and his personal warmth and generosity making each IKT member feel genuinely welcomed at each Congress. It therefore seemed fitting that Enrico hosted this Congress at home (he's current Director of Mudam, and former Director of Casino Luxembourg), where he was able to reveal the cultural gems of Luxembourg and region to us. The congress participants visited Mudam, Casino Luxembourg, Carré Rotondes, Fondation de l'Architecture et de l'Ingénierie, FRAC Lorraine, Faux Movement, Centre Pompidou Metz, Centre dâart Nei Liicht, and the Centre National de l'Audiovisuel.

The Congress kicked off in beautiful Luxembourg with the traditional introductions, or Members' Forum as it is officially known. These introductions are quite something: it takes up nearly the entire morning, but every attendee (about 150 curators or so) stands up and introduces themselves briefly to the room. It is a deceptively simple thing, but it really helps to cement the names and faces of your colleagues in your mind, as well as allowing people to quickly reveal a little something of their personality (even in just two minutes, there's time for jokes, name-dropping, charming references, etc). After this Members' Forum, the Congress launched right into exhibition tours for the afternoon in Luxembourg, before swiftly moving on to Metz for more exhibitions. A very full day culminated in a behind-the-scenes tour of Centre Pompidou Metz. The highlight was definitely taking the world's nicest and smoothest freight elevator up to the top floor where artist Daniel Buren was waiting for us. He kindly chatted with us about the exhibition he was installing for several minutes before we went to the Town Hall of Metz for a welcome from the Mayor and a buffet dinner. Here's a short clip about Buren's show (in French):

On Saturday we were in charming Dudelange. The discussion panel was entitled "What is the good of Mediation in contemporary art?" for this year, and was introduced by Maria Lind, featuring presentations from Jorge Munguia Matute, Gabriel PÃ©rez-Barreiro, and Sally Tallant. Their presentations absolutely raised the problems of mediation, though they proposed some solutions too: notably, PÃ©rez-Barreiro's example of the deep integration of audience development and education into the Mercosul Biennale that he curated (read a great interview with him in this PDF here). Jorge Munguia Matute cited several inspirational examples of creating public dialogue, such as with the Pase Usted project in Mexico City, and Sally Tallant took us under the bonnet of the Centre for Possible Studies, part of Serpentine Gallery's engagement with the communities living around Edgware Road in London. 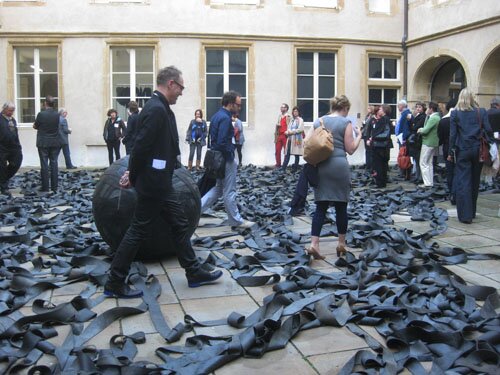 
The annual General Assembly also took place in Dudelange, and it was a little more exciting than usual, with plenty of discussion around the choice of venue for next year's Congress (Tel Aviv, Israel), new members being elected to the Board, and of course, the election of the new President: Friedemann Malsch, Director of the Kunstmuseum Liechtenstein. The fact that the Presidency of IKT passed from one tiny country (Luxembourg) to an even tinier one (Liechtenstein) was pointed out by Enrico Lunghi, to laughter from the assembly. The evening's party at Casino Luxembourg was also wonderful and memorable, taking place in the cavernous, damp stone basement of the building and with enough delicious Crémant de Luxembourg to fuel us well into the evening.

A true highlight was the tour of private corporate collections that took place for those who decided to stay until Sunday. Enrico really worked some magic to get these collections open to us not only on a Sunday, but a Sunday on a holiday weekend! We toured the Deutsche Bank Luxembourg, Arendt & Medernach, and the European Investment Bank. It was a well-balanced combo: wealthy international bank, medium-sized legal business, and the largest multilateral lending institution in the world. At the European Investment Bank, it was interesting to hear of their plans to ship some of their collection to Greece for an exhibition. We were told they almost never send works out in this way, but that holding a small exhibition in Greece was a kind of expression of solidarity with Greeks in their difficult financial time. 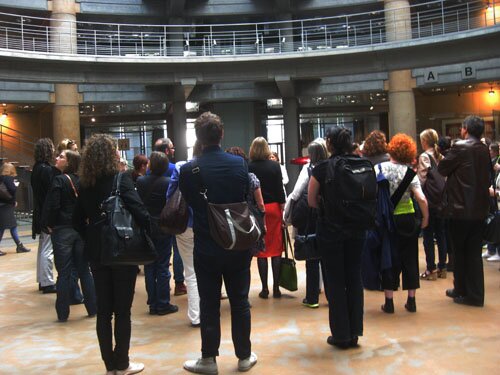 
As always, it was a great opportunity to meet and interact with curators from all over the world. I'm already looking forward to next year in Tel Aviv.